I’ve been on a transportation kick lately. Yesterday I spent a lot of time carving a block into a picture of an old-fashioned Volkswagen bus, the kind we had when I was little. It was bright orange and large enough to fit all five of us kids plus parents way up there in front. I tumbled out of that car. The door had not been closed securely and when my mother got to the bottom of the driveway, I leaned against it; it swung open, and I fell out right at the feet of the postman.

Anyone who has ridden in the VW bus will remember the sound of the engine, a high buzzing roar. And how about the side doors which opened like French windows — none of that easy-peasy sliding door stuff in those days. Because I was one of the scrawny little ones, they put me in the way back, a shelf over the engine, I think, on a trip from Boston to New York City to go the the World’s Fair in 1964. I thought it was a treat for perhaps the first fifteen minutes.

I learned how to drive in that bus. It had a stick shift that was about a yard long, coming right out of the floor of the bus. Ah, the good old days.

Here is the drawing: 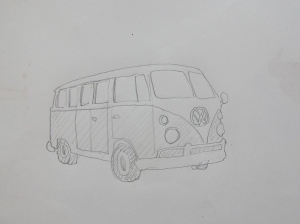 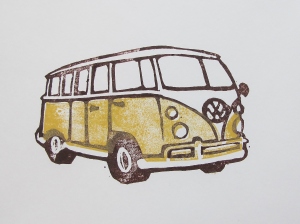 Welcome to my blog where I write about the art and craft of my business.My goal is to make beautiful things, to make art part of everyday life, and to make my friends and family smile. Not necessarily in that order.